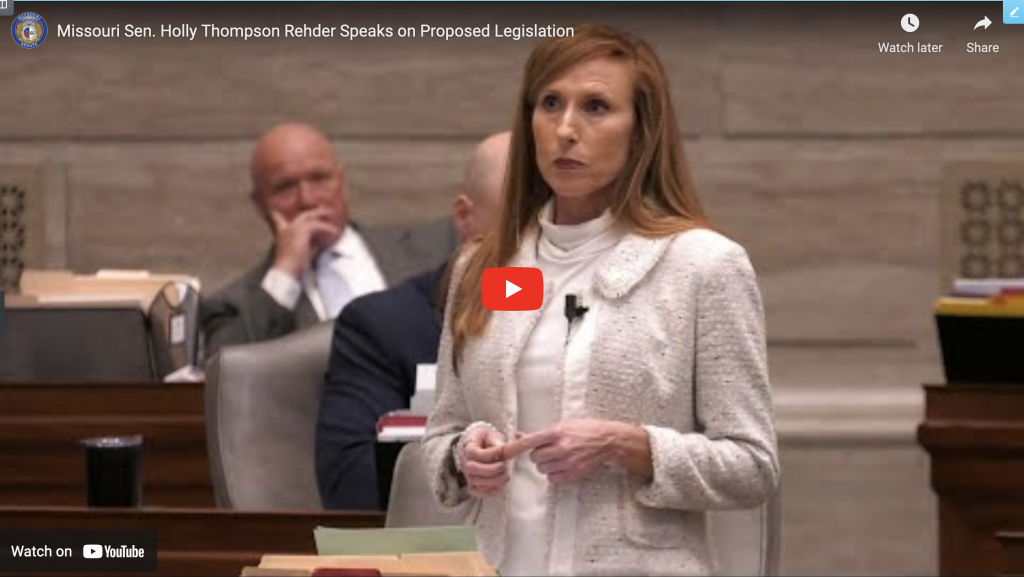 Spoken on Missouri Senate floor, March 3, 2022, regarding the continual disingenuous actions of some senators:

Working in politics, you see a lot. Big egos—lies­—political maneuvering­—the majority of which, is rooted in self-interest. That’s why this past week hearing the term tossed around of a “Show horse instead of a workhorse”, kind of struck a nerve.

I was called a show horse once, by one of my opponents, a man who seemed to manage his wife’s estate for a living. Even though everything I have, I have because I actually pulled myself up from my own bootstraps. Quitting school at 15 because I had to take care of my family, then having my first baby 16, I realized I was taking my daughter down the same path that I wanted out of.

So, I changed course. I put my head down and I worked to provide a better life for my daughter. I got my GED, then took college classes at night and on the weekends while working full time and raising a family. It took me 17 years to get my degree, but I got it. That’s all a history that I’m proud of. That I’m thankful to our almighty God for. He has kept his hand on me, and I am thankful for that with every fiber of my being. I find it a great honor to work and serve the people of this state from my position here, in the Missouri Senate. I do not take it lightly the responsibility that has been given to me, and that is why when I see the tactics that have continued here in the Senate for the last few weeks, I find it hard to hold my tongue.

Back to the “show horse vs. a work horse”. Last week’s Fast Track bill for example. When a senator attempts to put amendments on a bill that they know won’t make it on, or will kill the bill altogether, that’s a SHOW horse. Literally doing something for SHOW. For theater. Knowing it will never become law on that bill. Then, when that amendment fails, as they knew it would, they rail and rail as if all Justice has just gone to hell. Again, they are providing great theater, but they are an ocean away from being a statesman. Or workhorse.

Counter that with a work horse. A workhorse spends time working through the tough issues. Like the ladies were during the Fast Track debate with the senator from St. Louis County. We were across the hall working through everyone’s concerns on our congressional map, hoping to reach a compromise that everyone could live with. A policy that must be passed—we all know filing starts today.

One side note that I find interesting is that I, myself, was in our meeting actually showing a map to everyone from one of the senators who then decided to attack us on social media this weekend for not playing along with their “floor games” during this time.

For not joining the “show horses” out here on the floor who were only throwing amendments to manipulate the process for their own headlines. They continue to waste our precious time by giving speeches into the camera, all while diminishing our hope of actually having the time to get the bills passed that have been filed to ban critical race theory and ban men playing in Women’s sports for ALL educational institutions. Not just the higher ed ones that the Fast Track bill would have done.

What is also interesting is that I don’t even approve of the Fast Track program. As I said before it took me 17 years to get my degree because I had to do it while working and raising a family, as well as paying for it as I went. I think school is more valuable when you have to work for it. Flip side of that is that I know many of my constituents are using the Fast Track program to better themselves. So, I’ll vote against it, but I won’t attempt to muck up the process.

I also won’t be spiteful when I don’t get 100% of what I want. I won’t kill precious time in this body because I’m throwing a temper tantrum and I won’t use it to twist the truth and assassinate the character of others who I know in my heart believe the same way I do.

But you don’t see me out waiving that banner—because it would be false, and honestly, mean-spirited. Because I know their heart, and their past actions are clear on the subject. They’ve always been against funding planned parenthood. Just like I, and so many of the others who voted against those amendments, have always been against CRT and men participating in women’s sports.

My last thought on this is for those who think this is the right path—the tearing down of each other at every turn by throwing false accusations at the wall to see if it sticks. I ask that you pump the breaks long enough to realize that you are actually putting fear in people. Which I find cruel. For your own headline. YOU know the truth—but YOU—for whatever reason, have no trouble damaging someone’s reputation and scaring Missourians to think that their conservative supermajority is not conservative at all.

I didn’t run for office to have a career in politics, I ran for office to make a difference in people’s lives. I’m a business owner who has had a successful career for decades. I make my money at home. So, I feel like I’m someone who can sit on this floor and call balls and strikes. all. day. long.